By Dr. Brandon Colby MD, a physician-expert in the fields of genetic testing and personalized preventive medicine.

Many people turn away from breast cancer genetic testing because of the cost. Despite the value of knowing whether someone has the BRCA1 or BRCA2, people feel the investment in the information is not worth the cost. They take a chance and decide to rely on early detection through breast self-exams and mammograms.

The only issue with this is those with a family history of the BRCA1 and BRCA2 gene mutations are missing out on the opportunity to decrease their cancer risk. By knowing whether someone has the BRCA1 or BRCA2 mutation, people can work with a genetic counselor and health care provider to reduce their chances of developing breast cancer.

A genetic test for breast cancer does not cost as much as most people believe, including health care professionals. BRCA testing can cost up to $2,000 depending on the lab doing the test.

What is important to know is that most labs will only test for the BRCA genes. They do not look at any other cancer genes. While this genetic information is valuable, it is much too expensive and limited.

When the news of BRCA and its relation to breast cancer, Myriad Genetics patented it, so they were the only ones who could test for the BRCA genes. They monopolized the market, so they were able to charge as much as they wanted.

When the Supreme Court invalidated the patent, more companies were allowed to test for the BRCA genes driving the cost down. Breast cancer genetic testing cost has been reduced so much that most people can now afford it without the help of health insurance.

Does Insurance Pay for Genetic Testing for Breast Cancer 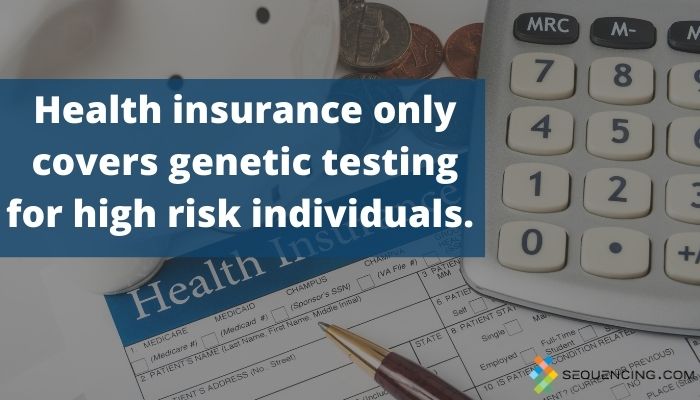 Insurance pays for genetic testing for breast cancer as long as the person meets the criteria. This includes having a family history of breast cancer or a family history of cancer, such as pancreatic cancer or ovarian cancer. While oncology costs are much more expensive than gene testing by most laboratories in the United States, insurance companies are often charged a lot of money for the test, which is why they are strict with insurance coverage.

Higher risk individuals such as those of Ashkenazi Jewish descent, history or breast cancer, or history of ovarian cancer often receive coverage for breast cancer genetic testing. These risk factors increase their susceptibility to a cancer diagnosis.

Health insurance doesn't always cover 100% of the cost of a DNA test. A co-pay may be required, which is usually a percentage of the total cost. Every health insurance provider has its own costs for breast cancer genetic testing and policies differ greatly.

Under the Patient Protection and Affordable Care Act (ACA), genetic counseling and BRCA testing for women with the risk of breast cancer (personal and/or family cancer history) are covered with no-copayment. Genetic testing for breast cancer is covered 100% for in-network health care providers.

Does Medicare Pay for Genetic Testing for Breast Cancer 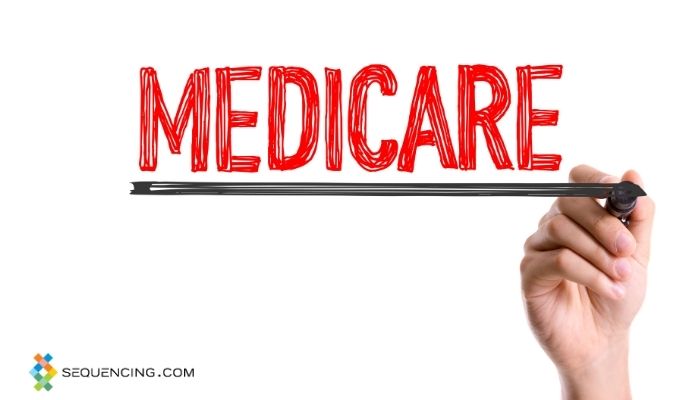 A risk assessment must be conducted by a genetics counselor who is not associated with a testing laboratory. This assessment should consider the lifetime risk of developing breast and other types of cancer.

Medicaid covers genetic testing for breast cancer in all states except three. Those three states are:

These three states do not cover the cost of genetic testing for hereditary cancer risk.

Multigene panel testing is not covered by most Medicaid programs.

Is Genetic Testing for Breast Cancer Worth It?

When people see the cost of genetic testing for breast cancer, they often wonder if it's worth it. People who have family members who have suffered from cancer should seriously consider the possibility they may have an increased risk of suffering from it as well. Hereditary breast cancer puts people at a very high risk of suffering from it when compared to the general population. Not seeking breast cancer genetic testing because of the cost may not be the most cost-effective option, as cancer treatment can be thousands upon thousands of dollars.

People who know they have gene mutations that can cause breast cancer can take steps to prevent it from developing and threatening their life by having a mastectomy or taking another preventative measure.

A cancer screening may not be enough to motivate people to do something about their increased risk of breast cancer. They need to know they are more at risk.

What to Do About the Breast Cancer Genetic Testing Cost 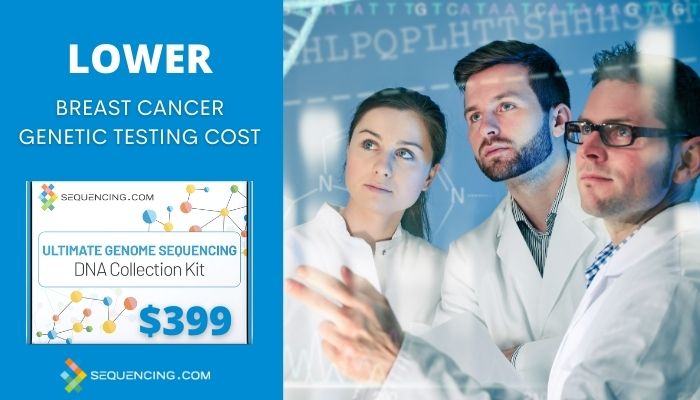 What many people do not know is that breast cancer genetic testing cost is not thousands of dollars. It can actually be quite affordable at about $400.

Genetic testing laboratories do not want the general population to know that testing is much less than they pay or the insurance companies are charged because it's a huge money-making industry. The reality is that the DNA test needed to have the raw data analyzed for BRCA1, BRCA2, and many other cancer-related gene mutations can cost just $399 and accessed online.

Sequencing.com has an Ultimate Whole Genome Sequencing test service sequences BRCA1, BRCA2, as well as 20,0000 other genes. This provides more comprehensive and accurate test results, leading to a higher level of knowledge for cancer risk.

Will insurance companies, Medicare, Medicaid, and the Affordable Care Act pay for the Ultimate Whole Genome Sequencing test service? No. However, due to the breast cancer genetic testing cost being so low, most people do not need financial assistance.

By ordering the Ultimate Whole Genome Sequencing services on Sequencing.com, you will be able to submit your DNA sample to our laboratory to have your entire genome sequenced. This includes full sequencing of the BRCA1 and BRCA2 genes as well as all other genes known to be associated with breast cancer such as PALB2 and ATM.

Instead of traditional tests for breast cancer that only test the BRCA1 and BRCA2 genes, whole genome sequencing will obtain data on all of your genes, which means you'll receive data on all 20,000+ genes.

It's amazing (and concerning) that testing just two genes (BRCA1 and BRCA2) can cost thousands of dollars while sequencing your entire genome of 20,000+ genes, which includes BRCA1 and BRCA2, now only costs $399. This is possible because whole genome sequencing uses modern, advanced technologies.

The Prevent Breast Cancer DNA Analysis app will then be able to analyze your genome data for any mutations that are associated with an increased risk of cancer. The analysis includes a comprehensive assessment of all breast cancer-related genes including BRCA1, BRCA2, PALB2, and ATM.

Dr. Colby holds an MD from the Mount Sinai School of Medicine, an MBA from Stanford University's Graduate School of Business, and a degree in Genetics with Honors from the University of Michigan.