Imagine a world without disease.

This world may one day be possible. How? Through scientific advances in genetic technology that allow physicians to look at your DNA and predict future disease. By predicting the diseases you are likely to encounter throughout your life as well as the diseases you may pass on to your children, genetic technology is now able to empower you and your doctor to fight against the disease before it even manifests so that you can outsmart your genes and start protecting your future today.

Protecting Ourselves from the Future with Genetic Technology

The most powerful asset our species has to protect and preserve life is not our physical strength or speed or agility; it is our supreme ability to think. Eagles use their power of flight, speed, and eyesight to survive; lions use their size, muscular strength, and agility; and we humans use our mind, ingenuity, and fortitude. Although we may not be able to outmuscle or outrace some opponents, we have the ability to outsmart most adversaries, including disease. By allowing us to continually create, perfect, and benefit from technological advancements, our mind holds the key to our species’ survival and well-being.

As the human lifespan continues to lengthen, we’ll be faced with an increasing number of ailments and diseases. In the last 100 years, the average lifespan has increased from 35 to 80 years. Because of this, our society is now faced with an unprecedented number of diseases associated with aging, such as cancer, heart disease, and Alzheimer’s. Until now, our primary means of dealing with illness has been to wait until it appears and then try to treat it, often by drastic, debilitating, and painful means. But the best way to defeat disease will always be to avoid it altogether. We can do just that by studying our genetic code and using the information it provides to take control of our destiny.

Many of us go through life assuming that we’re either blessed or doomed by our genetic inheritance. I’m sure you’ve heard people say things like, “I got my great memory from my mom,” or “I can’t lose weight; it’s just in my genes. Both my parents are overweight.” But the groundbreaking news is that, even if your genetic inheritance has put you at increased risk for a disease, science now has the means to help you alter, minimize, and perhaps entirely avoid your current genetic destiny.

With the completion of the Human Genome Project in 2003 and recent advancements in DNA testing and analysis, it is now possible to predict which diseases you are likely to contract so that you can take steps to lower and possibly eliminate your risk. The key is that almost all chronic disease results from a combination of genetic and nongenetic factors (such as what types of food you eat and your other lifestyle choices). Because of this, understanding your genes gives you the insight that is necessary to identify and selectively modify your nongenetic risk factors, thereby decreasing your overall risk of disease.

Traditional Western medicine has been criticized for being reactive rather than proactive because it usually doesn’t take the offensive in attempting to prevent disease. Instead, Western medicine is primarily defensive because it tries to cure people of diseases they’ve already contracted. But with the new, revolutionary medical specialty called predictive medicine that no longer is true. The man-date of predictive medicine is twofold: to determine your personal genetic profile and then, most important, to provide you with the means to fight off potential illness before it occurs. My purpose in writing Outsmart Your Genes is to bring predictive medicine to the attention of the general public—the countless individuals whose lives it could potentially save—so that they can partner with their physicians to harness its extraordinary life-changing power.

About My Passion for Genetics 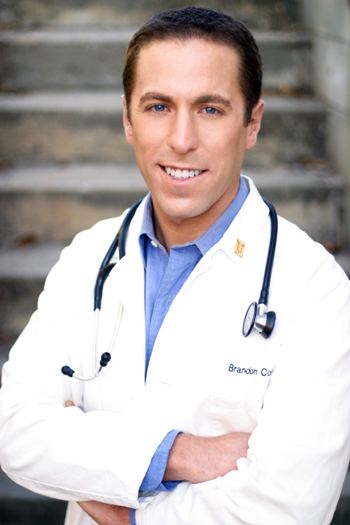 It was an accident of birth—that is, my own genetic inheritance— that first sparked my interest in genetics. I was born with a rare dominant genetic disorder called epidermolysis bullosa (EB for short), a condition that causes blisters to form when one’s skin temperature rises above a certain level. Anything—friction on the feet caused by running or friction on the hands caused by gripping the handle of a tennis racquet, for example—that raises the skin temperature causes painful blisters to form that then need to be lanced with a scalpel, leading to potentially serious infections. Although my form of the condition is not as severe as others, it was, nevertheless, both physically and emotionally distressing for me as a child.

I remember asking my parents why I was different from all the other kids, and their answer was that I was different because of my genes. When I was older and had learned what the word genes really meant, I naturally asked my parents if anyone else in our family had EB. The answer was no. They had searched back through many generations and couldn’t find a single family member with my condition. As I later learned, what this meant was that one of my genes had spontaneously mutated.

Because of my condition, I’ve had a deeply personal interest in genetics for my entire life. During high school biology, I was introduced to the science of genetics, which was then still a relatively new and emerging field. Even then, however, I understood that genetics had the potential to create a paradigm-shattering advancement in science and medicine. If we could map and perhaps even manipulate our genes, it would be possible to conquer all kinds of diseases. I was hooked. Genetics would become my life’s work.

When I entered the University of Michigan in 1996 there was no way to specialize in the study of genetics, but the university’s Honors Program allowed me to create my own major, and, as a result, I am lucky enough to have been in the vanguard of genetic investigation ever since. While I was still an undergraduate, I conducted research in two different genetics laboratories—one at the University of Michigan and the other in the human genetics laboratory at the Mount Sinai Medical Center in New York City, which was, and still is, run by my mentor, Dr. Robert Desnick, chairperson, the physician in chief, and dean of Mount Sinai’s Department of Genetics and Genomic Sciences. Working in these labs, I began to see that the practical applications of genetics were virtually boundless.

After graduating from Michigan I entered the Mount Sinai School of Medicine, where I became even more aware of the ways genetics could affect medicine on the clinical level. Based on years of genetic research, the doctors at Mount Sinai had developed an enzyme-replacement therapy for the treatment of Fabry’s disease, a rare and potentially fatal illness whose sufferers lack the enzyme that is responsible for breaking down an important type of fat found throughout the body. As a result, the fat accumulates and causes seri-ous harm to the body’s organs. The enzyme-replacement therapy, however, allows patients to live normal lives. Genetic research had successfully moved from the research laboratory to the patient’s bed-side and led to the control of a debilitating disease. It was clear that this was only the tip of the iceberg for genetics.

As a medical student and then as an intern, I saw many patients die of illnesses that would have been curable if they had been diagnosed sooner. People in their 20s, for example, were dying of heart attacks caused by a genetic predisposition they didn’t even know they had because it produced no symptoms. The more I witnessed, the more I realized that the real key to creating a medical revolution was to change the existing medical paradigm from being reactive to being proactive, and the way to do that was by moving decades of genetic research out of the laboratory and into the hands of the people who needed it most: the patients and their doctors.

For the past few years, I’ve been working on ways to accomplish this by facilitating the integration of genetics into the practice of medicine. As a fully licensed medical practitioner and founder of both Existence Health, a predictive medicine practice, and Existence Genetics, a personal genomics company, I conduct considerable research of my own and have become familiar with the tens of thousands of scientific studies on genetic testing. In this book, I share with you the invaluable information provided by many of these studies so that you can better understand not only how genetic screening can benefit you right now but also how and why it is already changing the practice of medicine.

Technological advances are now providing ways for physicians to examine all of a person’s genes at one time and at relatively little cost. What this means is that the gap that has long existed between genetics laboratories and physicians’ offices can finally be bridged. Now we are able to link genetic predictions with actual medical practice. Predictive medicine has been born.

In the pages that follow, I first examine the extraordinary possibilities the power of predictive medicine gives you for outsmarting your genes. You’ll see how science has taken us from the initial experiments of a 19th-century Austrian monk to our present-day understanding of how genes govern all the functions of our body. I’ll also discuss our newfound ability to map the entire, unique genetic makeup of each and every individual, how this relates to you and your family, and the specific information you need to know before you undergo genetic testing. I will then explain in Part II how genes determine your risk for a wide variety of specific diseases and traits and, most important, what you and your doctor can do right now, based on the results of your genetic tests, to alter your genetic destiny.

Battling disease and suffering is my life’s mission, and predictive medicine is the most powerful tool I can give you to maximize your health and prolong your life, no matter what your present age or health status. Acquiring and acting on the information I provide may well be a life-altering experience for you. The future is here, and I invite you to join me as we explore the many ways that predictive medicine can not only improve your health but potentially extend your life and the lives of those you love.